I've been woefully neglecting this blog, but I hope to be changing that. I am in the progress of launching Sofia's Tune, but after that I have two projects I'm excited about. Since both are set in ancient Ireland, I thought readers of this blog would be interested in hearing a little more about them.

Who remembers Brigid of Ireland? Can you believe this book will be ten years old next spring? It went out of print a couple of years ago so with the rights back I launched an ebook version with a new cover. 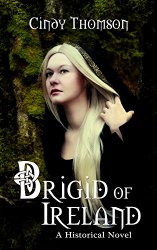 And then I thought about that old manuscript sitting in my computer files doing nothing. It's a follow up to Brigid. At one point it had serious interest from a publisher, but then the publisher changed its focus, which no longer included books like this one. My agent thought that a Christian allegory/fantasy would be too hard to find a home for. So, I decided to bring it out myself because I know Brigid still has fans out there. (I kind of promised a young girl at last summer's Dublin Irish Festival that I would have it available.) The book is written, I've found an editor, and I'm just going through it one more time before I send it to her. My cover designer is also on board, so that book (untitled) should be available in 2016! I may need help with the title. Stay posted!

I'm excited about it because even though I loved writing The Ellis Island Series, I could feel the passion I had for this story as I re-read it. I can't wait to bring it out to readers.

If you've read Brigid, you may remember that early in the story she helps a young girl escape an abusive father. The girl has leprosy and is healed during their flight. The new story opens with this girl, Aine, who is now a grown woman, escaping again. She has a stolen a precious book with powers and she is seeking Brigid, the one she believes has the power to protect them both. Remember Ardan, the bad guy banished to a distant island? He's back too and seeks revenge. However, God has Ardan on his radar and Ardan cannot figure out who has targeted him.


And after that? I'm working on a story based on legends surrounding Columcille's mother. There are three patron saints of Ireland: Brigid, Patrick, and Columcille. That's all I'll say for now. More to come!

What do you think? Are you interested?
Posted by Unknown at 1:16 PM