Are you familiar with the concept of prayer walking? According to Wikipedia,  "A prayer walk is an activity that consists in walking and praying at the same time[1]. It's done not for the physical benefit but for the spiritual exercise..."

Surely the Celts invented this, don't you think? All you have to do is read the Carmina Gadelica to find numerous examples.


These prayers were often chanted while walking, either on a pilgrimage up a mountain, in circles around a holy well, or just doing daily chores.

I'd like to do more of this myself. What about you?

May green be the grass you walk on,

May blue be the skies above you,

May pure be the joys that surround you,

May true be the hearts that love you.

Posted by Unknown at 8:14 PM No comments: Links to this post 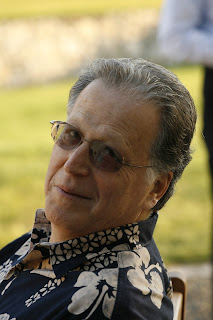 
For openers it would be fair to ask, “What does this guy know about Ireland. He’s a Jewish guy born in Chicago and raised in a traditional Jewish environment.” Well, ironically, I’ve got a lot to say about “why Ireland” and it starts with the fact that after a failed marriage to “one of my own”, years later I married an Irish Catholic lass, born in Manhattan, both of whose paternal grandparents emigrated to the States from Ireland around the turn of the 20th century.

Through her I began to learn about the history and culture of the Irish, from Brehon law to “the Troubles”. Both of us had begun horseback riding during our work careers and in 1988 we first went to Ireland together on a horseback riding trip and this was the beginning of my real connection to the country.

You’d have to be an eejit not to fall in love with Ireland as a horseback rider because it’s a country that reveres the horse. That trip was the hook and subsequently my wife and I returned to Ireland on fourteen separate occasions for extended stays spanning a twenty year period.

The first time we flew into Shannon, I wondered if the gorgeous visage of the quilt work of the forty shades of green laid out in the pastures underneath us was just a mirage—one that would rapidly dissipate. It didn’t, and that visage was the beginning of an enduring love affair between the Old Sod and me.

In our early years of returning to Ireland we traveled throughout the country and saw all the sites. On those travels I came to adore the culture, the food, the drink and, of course the craic. I came to love the myths, the blend of the ancient and modern sites, and being surrounded by the forty shades of green throughout the countryside. I loved the smell of burning peat, the ever-changing weather (summer, fall, winter and spring—all in the same day), and, of course, the horseback riding. 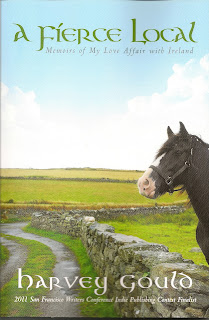 After we’d seen the sites, ultimately we settled into the tiny village of Adare. With a population of about 1200, it had roughly the same number of people who lived in a square block of the city neighborhoods in which each of us had been born. But it was there that we returned year after year, living in the same cottage and getting to know the butcher, the baker and the candlestick maker. It was there that we became so integrated into village life that accepted us as being one of them or, in Irish terms, as being fierce locals. And it was there that we learned some of life’s real values—sharing a cuppa and some good craic with local friends, having the pub owner whisper to us the dinner specials, whispered so that only us locals, not the “tourists” would know, taking the time to marvel at the smell of fresh cut fields.

So in the end the question for anyone regardless of heritage isn’t “Why Ireland”; the real question is “Why Not Ireland?”

Guest blogger Harvey Gould is the author of A Fierce Local: Memoirs of My Love Affair with Ireland, a finalist in the San Francisco Writers Conference Indie Publishing Contest. For more information, visit www.harveygould.com or check out Harvey’s blog, www.harveygould.authorsxpress.com

Two years ago on this day I woke up after having what I thought at the time was an odd dream. I dreamt about my oldest sister. I had no reason to be dreaming about her. I'd seen her about a month earlier after her granddaughter spent a few days with me. My sister had struggled with obesity all her life. In my dream, she was thin, walking without any difficulty, and extremely happy. She was beautiful.

When I woke up I thought the dream was so odd that I immediately told my husband about it. Late that evening I got a call from my father. My sister had passed away suddenly without warning.

God was showing me my sister in Heaven. No physical impairment. Beautiful. So happy.

I believe God speaks to us in dreams sometimes. Not every time. Some of my dreams are just plain wacky, like forgetting to wear pants when I go out in public. Know what I mean? But then there are special dreams, like this.

Dreams are in the Bible, and it's clear God uses them to communicate sometimes. Who could forget Joseph's dreams and his ability to interpret dreams? The ancient Celts believed dreams were significant as well. I've blogged about St. Patrick's dream and St. Enda's dream, one of my most popular posts on this blog.

I cherish this dream about my sister. It brought me great comfort. I'd love to hear about your significant dreams. Care to share them here?
Posted by Unknown at 3:51 PM No comments: Links to this post

That's the Way it Was

I came across this video and it spoke to me on more than one level. It's the explanation of what a sculpture was supposed to mean. But it's always the story of misunderstanding and political correctness gone wrong. And....it's wonderful Irish storytelling.

What do you think?

Posted by Unknown at 9:49 AM 2 comments: Links to this post