Storytelling is a Celtic tradition (although it's found in most other cultures as well.) I've been thinking a little about stories lately. Rick Warren in The Purpose Driven Life says: "Shared stories build a relational bridge that Jesus can walk across from your heart to theirs." I love that. I believe the early Celtic Christians were just like that. They got to know people by sharing their stories.

Seanachaidh is Irish for storyteller. I tell stories through the written word, but some people are hugely gifted in oral storytelling. I used to be a preschool and kindergarten teacher, so I did my share of storytelling to children. It was great fun, although I do not have much acting talent. But I don't think this kind of storytelling was necessarily what Rick Warren had in mind. He was simply saying that everyone has a story to tell. I believe that's true. You've likely had an experience and learned from it and others can be inspired by that story.

A lot of people are inspired by the story of a handicapped baseball pitcher who is in the National Hall of Fame. My cousin ran across this piece on the Internet which uses this man's story to inspire those who don't think they have anything special to offer.

There are lots of stories to tell, and many that you alone can share. I encourage you to tell them, in whatever format you are able.

Here are some examples of people doing just that:
Lloyd Peters
Stories by people with disabilities
Your Life is Your Story

Posted by Unknown at 12:29 PM No comments: Links to this post

Ninth Wave of the Sea


There is an ancient belief that if you count the waves at sea, the ninth one will be the most powerful. If you can defeat it and survive, then you can survive anything.

I'm not a sailor, far from it. I'm not real comfortable in a boat. But I am curious. I first learned about this from Tim Serverin's The Brendan Voyage. Actually, Severin says it's the seventh wave, but the point is the same.

I'm working on my first draft of my novel, Brendan the Navigator. I'm at a point where the crew is about to endure a frightening storm at sea, not their first, but definitely their worst.

So, I've been thinking about this ninth wave. What kind of fear must sailors feel as they count them off: five, six, seven . . . they know it's coming, the worst one yet. When it does come, they think they are going to die. But they don't give up. It's not human nature to let go and die. They fight. And once the fight is over and they've won, they know they can endure anything, even though they'd rather not face a ninth wave again.

I don't think I've hit that wave in my own life. But I'm not counting: four, five, six . . . I have a lifesaver. This is a Psalm I'm including at the start of the chapter I mentioned: "You rule over the surging sea; when its waves mount up, you still them." Psalm 89:9
Posted by Unknown at 1:50 PM No comments: Links to this post

Ask for the Ancient Paths

This is what the LORD says:
"Stand at the crossroads and look;
ask for the ancient paths,
ask where the good way is, and walk in it,
and you will find rest for your souls."
(Jeremiah 6:16NIV)

The word "ask" really strikes me in this passage. Who do we ask? Those who went before us, I think.
Posted by Unknown at 5:33 PM No comments: Links to this post

Is Celtic Spirituality nothing more than romanticism? 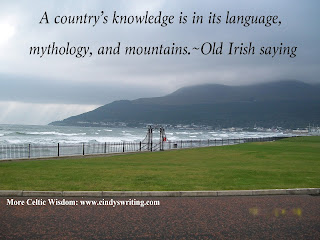 In America, we are facinated by our Celtic roots, and our German roots, and our Italian roots, and our English roots, and so on. That's because America is a melting pot and we are constantly striving to discover from where we came. In my opinion, that's healthy. There are stories from our past that have lessons to teach us and we should learn from them. That idea didn't come from me of course. There are lots of famous quotes to that effect. Perhaps the most famous is that of Irish born English statesman Edmond Burke: "Those who do not know history are destined to repeat it."

But as we all know, history is a combination of truth, myth, and romanticism. So it goes with ancient Celtic spirituality. Ian Bradley makes this point in his 1999 book, Celtic Christianity, Making Myths and Chasing Dreams.
I think we can learn from the ancients as long as we seek the truth of the stories. Not necessarily the truth of what actually happened (impossible to do when looking at the lives of people living in the 4th century to the 11th century) but the truth that the stories convey. What did these people learn about God? Why were they able to accomplish great feats and spread Christianity back to the parts of Europe that had lost it?

I'm not done with this book yet, but so far it is serving as caution to make sure I'm seeking the Celtic way out of love for God rather than out of a romantic notion of going back to some perceived "good old days" or believing that there are secrets known only to those who lived long ago. The truth is out there for all of us, if only we will seek the ancient paths.

Until next week,
Cindy
www.brigidofireland.com
Posted by Unknown at 10:00 AM No comments: Links to this post