The Feast of Saint Columba

I prefer the Irish Columcille, which means Dove of the Church. He was originally named Crimthann, which in Irish means Fox. However, once he was fostered in the church he gained this new name. It's said he had a temper, so perhaps this name was in jest. It came to fit him with time, however, because he was as devoted to the church as any saint, perhaps more so.

A Character in My New Novel

I am writing about Columcille, and Enya (Eithne) in my current work-in-progress. The idea about temperament how much is inherited and what one can do about it is something I'm contemplating as I write. Nurture vs Nature. Which is strongest? What can be overcome?

In the meantime, feel free to revisit this post I wrote on the saint, whose feast day is today.
Posted by Unknown at 10:22 AM No comments: Links to this post

The Celtic Love of Books 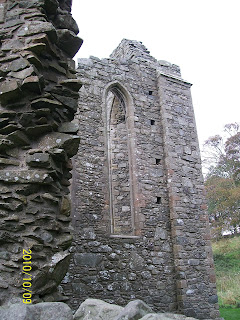 I love telling the story of how St. Columcille (Columba) loved books. They were rare in the 6th century when he lived, and to have one and be able to make your own copy to keep and study was the greatest treasure to saints and scholars. Columcille, whose name means Dove of the Church, copied a copy of the Vulgate without permission. Making a copy lessened its value and a war was fought over this book. It was that important.

The idea of how cherished books were in that time period inspired my novel, Pages of Ireland. My now published novel originally had another title. I wrote on this blog how the story was inspired by the Book of Durrow. I was fortunate enough to be able to see the Book of Durrow when I visited Trinity College a few weeks after I wrote this post.

This is the title of the novel I'm currently working on, which will include the tale I've mentioned at the beginning of this post, but from the perspective of Columcille's mother.

If you haven't yet checked out series, let me introduce you.

Posted by Unknown at 3:38 PM No comments: Links to this post

The Visual Image of the Journey

I think a lot of people would agree that life's a journey. From the cradle to the grave, the life we live leads us onward, and if we believe in following Christ, it leads us to a greater reward.

Perhaps that is why when I was in Ireland I kept snapping photographs of paths, gateways and doors. I like to have a visual image of this spiritual concept.
My photos are pretty varied. I'm only including a few in this post. I suppose you could read something into that, such as there are many roads to heaven. As a Christian, I believe Jesus is the One Way, but truly people are finding him in many places. I think a lot of people feel that Ireland is a thin place, the kind of place that drips history, and culture, and spiritual longing. I have yet to travel to all the places I'd like, but I am sure there are other places in the world with that kind of feel.

I have many photographs of pathways that men built. (Yes, I'm including women in that noun.) I can see the creativity in these images. God is the Great Creator, and being made in the image of God, we are also creative spirits.

Finding a path in nature, even if humans blazed it, can also be an inspiration. There is a path next to St. Brendan's cathedral in Clonfert, County Galway, that is sign-marked as a nun's walk. A tree at the head of the path bears the prayers and cloths and ribbons of sojourners. But following the path beyond through the wee forest, I felt as though I could breath deeper than out near the road. It was like a secret garden. The following pictures are from that exploration.

SaveSave
Posted by Unknown at 2:57 PM No comments: Links to this post