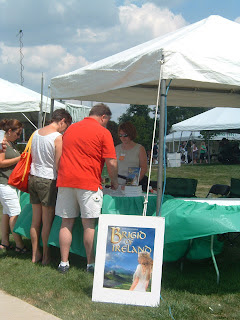 But then I heard the Celtic music and began to browse the cultural areas. I attended an Irish-themed worship service on Sunday morning. I began to research the ancient Celtic Christians and the Celtic people, and learned that yes, Celts were pagan. That was before St. Patrick, of course. (I’ve been writing about St. Patrick lately—more on that in another blog sometime.) St. Patrick was a Roman Britain, kidnapped when he was 16 and brought to Ireland as a slave. Much later, after he had escaped, he had a dream where a man bearing letters approached him and handed one from “The Voice of the Irish.” It turns out Patrick heard the people in Ireland begging him to come back, and he, trained in the church by now, saw it as a missionary call. We know, of course, that is exactly what it was.

There are lots of places on the Internet and lots of books where you can learn more St. Patrick (one is the Saint Patrick Centre in Northern Ireland. I met the director this past August in Milwaukee), but back to the pagan thing. Of course, it was to the pagans that Patrick would minister. He, and those who came after him—including St. Brigid, the subject of my novel, Brigid of Ireland—turned Ireland into a Christian nation in just a few hundred years. But remarkably this was done without bloodshed, a contrast to the Crusades later. How was that accomplished? They did it not by condemning the people, but by coming alongside them to show that the things that they already believed and held in awe were created by the One True God. Sound familiar?

Acts 17:22-31 (New International Version)
“Paul then stood up in the meeting of the Areopagus and said: ‘Men of Athens! I see that in every way you are very religious. For as I walked around and looked carefully at your objects of worship, I even found an altar with this inscription: TO AN UNKNOWN GOD. Now what you worship as something unknown I am going to proclaim to you. "The God who made the world and everything in it is the Lord of heaven and earth and does not live in temples built by hands.’”

It was this example Patrick and the early Irish Christians followed. And it’s a great example for us to use today. Were the pagans evil? From what I’ve discovered, they weren’t any more evil than any other group of people. Very early on there were probably human sacrifices, and that’s what scares people off, but I don’t think they were common by Patrick’s time. People could argue with me, but the main point is that the pagans worshipped what they knew. They sensed God in the natural world. And that was a perfectly natural response.

Romans 1: 20 (NLT): “For ever since the world was created, people have seen the earth and sky. Through everything God made, they can clearly see his invisible qualities—his eternal power and divine nature. So they have no excuse for not knowing God.”

I can’t possibly answer all questions on this issue in one blog, but there is a terrific discussion group online where Christians discuss these things. You’ll find me there a lot: Celtic Christian Spirituality