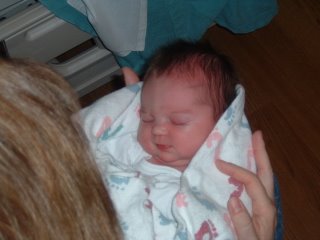 This is my great niece Kayleigh. She was born on Nov. 25 and she was less than 24 hours old when I held her in this picture. Although she was in her mother's womb for 9 months, I can't help feeling that she is, at this age, closer to God than the rest of us. Haven't you felt that when you've held a newborn in your arms?

The spiritual belief of the ancient Celts was that there is a thin ribbon separating this life from the next. Every once in awhile you get a glimpse into that other world. I did--when I held Kayleigh.

Congratulations, Michelle, Nate, and Felicity.
Posted by Unknown at 9:38 AM No comments: Links to this post


Who's tired of political commericals on TV, radio, in your mailbox and hanging on your doorknob? Raise your hand. Geesh! Did you feel that rush of air when everyone in America just raised their hands?

Seriously, we are tired of it. But aren't we also thankful for it? People having a say in their government did not originate in America, though. The ancient Irish had an unwritten law called the Brehon Laws which determined punishment for offenses, among other things. Read about them here. What is interesting about them (and there is more than one interesting thing) is the many voices that were heard in this system of justice. From the Web site linked above: While the Brehon, or lawgiver, administered the law, the aggregate wisdom of nine leading representatives was necessary to originate a law or to abolish it. The nine needed for the making of a law were the chief, poet, historian, landowner, bishop, professor of literature, professor of law, a noble, and a lay vicar. Impartiality is the salient characteristic of all the laws for all the ranks. The king himself was bound by law to do justice to his meanest subject.
The king did not have absolute power. Some ideas that we think are fairly modern, aren't at all. That's why I love history. We owe so much to those who came before us.

Now, what kind of campaigning do you think they did in the early Middle Ages????
SaveSave
Posted by Unknown at 9:33 AM No comments: Links to this post