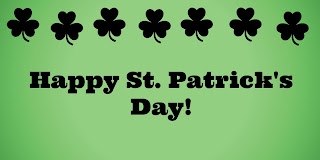 The Irish owner of a pub in Manhattan has banned the playing of Danny Boy for the entire month of March. He says, "It's overplayed, it's been ranked among the 25 most depressing songs of all time and it's more appropriate for a funeral than for a St. Patrick's Day celebration."

While it's true that it's not a traditional Irish song (at least not the lyrics, which were written by someone who never set foot in Ireland) I find the pub owner's remarks amusing. St. Patrick's Day does, after all, mark the day of the patron saint's death.

Irish songs are depressing? Who would have thought that?

I do agree that it's overplayed. I'm tired of it myself. Your thoughts?? Of course, if you're Irish, you're Irish all year, but everyone's a little Irish as we near St. Patrick's Day.

Which of the following is false?

(The picture is the Shamrock Club of Columbus Pipe and Drums at the Lancaster Celtic Gathering, March 1, 2008)
Posted by Unknown at 9:35 AM No comments: Links to this post