I'm at it again, doing lots of research and adding books to my collection.

Here are the latest:

This is a tiny book packed with lots of text, pictures, and references. I think it will be worth the price. So far, here's one phrase I've highlighted: Christianity probably first came to the Celts in the way it first came to most of the rest of the world: through informal contacts by 'everyday' Christians, most likely traders..."


I am really excited about getting into this book. The subtitle is: Rule and Writings of Early Irish Monks. The rules of the ancient monastic orders are here, as much as could be translated from centuries old documents. Things like: "Do not conceal your bodily faults when you speak to God in tears."--from The Rule of Ciaran, late 7th or 8th century. In the back are litanies and poems, which I've only just begun to look at. The poems, of course, have been translated into English, which is no small feat to make them still poetic. Here's one translated by Robin Flower:
The maker of all things,
The Lord God worship we;
Heaven white with angel's wings,
Earth and the white-waved sea.
And finally, I'm really enjoying my copy of a book written a hundred years ago: A Smaller Social History of Ancient Ireland by P.W. Joyce. This has lots of good information that I can use while creating a fictional world for my novels. 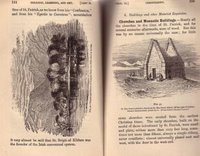 Posted by Unknown at 10:44 AM No comments: Links to this post

I picked up a copy of the Northumbria Community's book: Celtic Daily Prayer, Prayers and Readings from the Northumbria Community. The introduction, written by Richard J. Foster, helps explain the way this community is taking the old monastic rule and using it today, not by living by rigid rules and being isolated, the way the ancient monks would have, but by adjusting it for our lifestyles today. The group defines community not by communal living, but by joining together, in prayer and in commitment, to take this spiritual journey. From the intro: "These are folks who live in ordinary life, who face daily all the demands that you and I must face--demands of family and work, school and home." And speaking of the Sermon on the Mount, "For them this Sermon must never be relegated to another dispensation or viewed as utopian sayings to be admired in the abstract. Instead, this, Jesus' greatest teaching on how we are to live, is, very simply, to be lived--right in the midst of the pressures of contemporary society."

Everytime I read Matthew 5-7, there is always something new that pops out at me. This time it is the theme of worry. Not only is worry a problem for us in our everyday lives, but it's a problem for the church as well. Jesus tells us not to worry, but it's still hard not to, isn't it?

Well, that's something to think about. Another aspect that is central to this group's identity is its commitment to prayer. That's what I'll talk about next Friday, along with Esther De Waal's The Celtic Way of Prayer.

"The renewal of the church will come from a new type of monasticism which only has in common with the old an uncompromising allegiance to the Sermon on the Mount. It is high time men and women banded together to do this"
Dietrich Bonhoeffer, in a letter to his brother

I haven't verfied this quote, and I've seen it slightly different in another place on the Internet, but the idea of a new kind of monasticism is an intriguing. The Northumbria Community is a group of Christians in England (with a branch in the US) who seek God in the Celtic monk tradition. To quote them: "the Community is geographically dispersed and strongly ecumenical but with an identity rooted in the history and spiritual heritage of Celtic Northumbria."
The idea of a new monasticism is explained this way: "Monastic spirituality implies a single-hearted (solitary) seeking of God. This may or may not be carried out in the company of others, (the monastic tradition has embraced both alone and together), but the focus is clearly on returning to God, and making use of a daily rhythm of prayer (Office) and a Way for living (Rule), that enable us to ‘marry’ the inner journey, the landscape of the heart - a call to repentance, to self denial, and a call to recognise and to resist evil – with the outer journey, the landscape of the land, which has given us a platform to 'find a different way' of being Church. Then to offer the fruit of our life with all who come our way and cross our path in the everydayness of our roles, responsibilities and relationships, asking with them ‘Who is it that you seek? How then shall we live? How shall we sing the Lord’s song in a strange land?’"
What I love about this are the questions directed to others. "Who is it you seek?" Everyone is seeking something. Like Rick Warren explains so well in the Purpose Drive Life, everyone wants to know for what purpose they were put on this earth. Everyone is seeking answers. Perhaps the new monasticism is about asking seekers questions and sharing what we've learned by asking ourselves those same questions. Then, after we know who it is we seek, the other questions follow logically: "How then shall we live?" and "How shall we sing the Lord's song in a strange land?"
What do you think?
Cindy
www.brigidofireland.com
Posted by Unknown at 1:00 PM No comments: Links to this post

Music for the Soul Part 2

Music is well said to be the speech of angels; in fact, nothing among the utterances allowed to man is felt to be so divine. It brings us near to the Infinite.
Thomas Carlyle
There is so much more to be said about Celtic spirituality and music, that I couldn't stop with one post on subject. If you visit Celtic Christian Tunes, you'll find artists' links, reviews, and more. I found more Celtic Christian artists than I knew existed. Like David Fitzgerald, Troy Donockley, and Lianna Klassen. There are many more there I haven't explored.

I download songs to my iTunes and play them while I'm writing. The music quiets my mind and helps me to ready my spirit for what it is I'm supposed to write. I suspect many writers are the same. For me, it's Celtic tunes that inspire me the most. Vocals are fine, but words get in my way while I'm trying to get down my own words. So instrumentals are my favorites. You can learn more about these special instruments here.
Posted by Unknown at 9:14 AM No comments: Links to this post

Music for the Soul

Last week I talked about Malachy McCourt's History of Ireland. As luck would have it, he was in the news recently. Seems he's running for New York Governor on the Green Party ticket, even though he admits he won't win. See the Newsday.com article.

Today I thought I'd chat a little about Celtic spirituality and how it is expressed in Celtic music. Many people feel a spiritual connection while listening to music. Celtic music definitely stirs the soul, don't you think? In ancient times, bards or poets, normally in possession of a harp, were respected and sometimes even feared for the messages they brought.

If you visit www.brigidofireland.com and click on "Irish Links" you'll find some of my favorite groups. I'm constantly adding to the list, but as far as stirring the spirit, Jeff Johnson and John Doan are at the top of my list. Both have written music from their hearts in response to the old Irish tales and legends. I love that. I recently received an autographed copy of Doan's Eire, Isle of the Saints, A Celtic Odyssey. John wrote: "To Cindy, with stories in song. All the best! John Doan." I added it to my iTunes list that I play while I'm writing. It's awesome.

Stories, songs. Songs, stories. A declaration of what our spirits long to express.

Have you ever heard Contemporary Christian Celtic music? One CD I have and listen to to be uplifted and to worship God is Revial in Belfast by Robin Mark.
Posted by Unknown at 2:34 PM No comments: Links to this post