Saint Patrick's Day Blessing Upon You!

He wasn’t Irish, and yet America’s biggest Irish celebration is held in his name. He wasn’t the first bishop sent to Ireland, yet he is responsible for launching the evangelical push that converted the pagan Irish to Christianity. He never drove the snakes out of Ireland—there weren’t any, at least not in the literal sense. He wasn’t a leprechaun, though his day is symbolized by smiling little men wearing short green pants and sporting a long white beard. The number of people who know so little about the real St. Patrick always surprises me. It’s probably not their fault. What most people know about him is delivered on cards and in fairy tales.

So what is true about St. Patrick? He is one of three patron saints of Ireland; the other two are Brigid and Columba. He was born in the late 4th century, most sources say 387, somewhere on the coast of Britain—perhaps in Wales or Scotland. As early as 431 Pope Celestine sent a bishop named Palladius to minister to the Christians in Ireland. Patrick came to Ireland when he was 16, but he came against his will.

Fortunately, we have his own words left to us in the form of his autobiography referred to as his Confessio, and his Epistola, an admonition of British mistreatment of Irish Christians. Patrick was kidnapped by Irish raiders searching for slave labor, a common practice in those days. He worked for six years as a shepherd, and in those lonely times—as he later explained in his Confessio—he began to pray in earnest and trust God. He escaped and made his way back to his homeland. Later he became a bishop and had a dream or a vision in which he heard the voice of the Irish calling to him to come and walk again among them. This is how Patrick, who wasn’t Irish, became the most revered Irish saint in the entire world. He did return, and apparently had several run-ins with pagan kings. Patrick stood up for his beliefs and was instrumental in guiding the Irish people to Christ. His predecessor, who was probably already in the country when Patrick returned, had been sent to minister to people who already believed; Patrick ministered to unbelievers.

Did Patrick convert all of Ireland? Hardly. That would have been a near impossible task in one man’s lifetime, especially since it was done without warfare, unlike Europe during the Crusades. Others came after him and carried on his work in Ireland and beyond: Brigid, Columba, Brendan, Aidan, and Columban to name a few. But St. Patrick is the name today that identifies all things Irish. The holiday is no longer just a religious observance. It is a day of cultural pride for all those with any hint of Irish blood in their ancestry.

Read the most famous of St. Patrick's writings (although it was most likely written in a later time period): The Lorica
(Also referred to as St. Patrick's Breastplate and the Deer's Cry.)

—Cindy Thomson is the author of a historical novel, Brigid of Ireland and co-author of Three Finger: The Mordecai Brown Story. This story may not be copied with the permission of the author.
Posted by Unknown at 5:04 PM No comments: 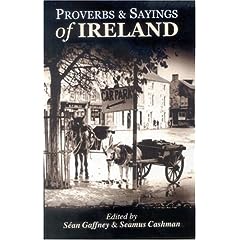 Anam Cara is philosophical and meaty, but good food for thought. The proverbs are mainly for research, but fun to read. The Quest of Three Abbots is a book I started a while ago and am just getting back to. Now that I'm done some other research, this is falling into place for me.

This is a book written by my writing buddy, Sharon Hinck. Different from what I usually read, but I enjoy Sharon's style and her wit. And she moves me with the serious scenes. Life is not all roses, huh?

We are in Joshua. All the blood and gore in the OT is a little hard to swallow, but the devotionals in this version are helpful in putting it all in prospective.
Posted by Unknown at 9:36 PM No comments: