Aren't legends fascinating? I've always thought so. Recently I met an author who thinks so too. In 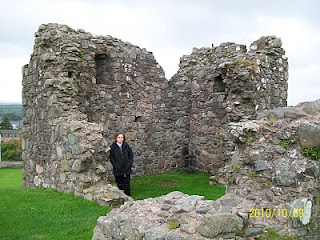 fact, her motto is: Legend begins where truth ends...Or is it the other way around?

Linda Wichman was just featured on a blog I participate in called Favorite PASTimes. She wrote a tale that picks up after King Arthur's death, called Legend of the Emerald Rose.

Doesn't it seem like the more we learn, the more questions we have? But then.....that's what I love about legend. You don't to prove it's true; but you always know it could be. That how I feel about Brigid and the other ancient Celts I study.

Since Brigid of Ireland was published, I've often been asked if she was a real person. The Brigidine Sisters of Kildare, Ireland, offer an excellent explanation on their Web site. They also discuss Celtic Spirituality. These writings are credited to be an "Extract from 'Rekindling the Flame - A pilgrimage in the footsteps of Brigid of Kildare' by Rita Minehan, CSB."

One of the characteristics of Celtic spirituality, according to the Sisters, is:
An extraordinary sense of the presence of God in their lives. God was uile láithreach - "the all present One".
Posted by Unknown at 9:05 AM No comments: Links to this post 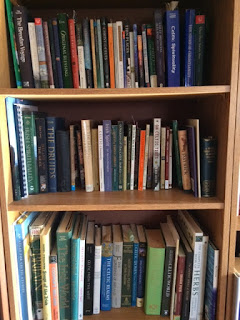 These books are part of my research for a non fiction title I'm working on. (When I receive and sign the contract, I'll give you more information.) I love doing research. I suppose that's why I write about history. Even so, when it comes to understanding ancient Celtic spirituality, we can mostly speculate. I love reading others' opinions and I can't wait to hear what a monk has to say on the topic.

I have yet to get back to Esther De Waal's Every Earthly Blessing, Rediscovering the Celtic Tradition, but I will. It's interesting reading her perspective as a lay person. I've read quite a bit of Ian Bradley's Celtic Christianity: Making Myths and Chasing Dreams. He gives good historical perspective on why scribes wrote the stories of the ancients the way they did. Much was politically motivated and/or exaggerated, but surely not all. The truth is in there somewhere, but do we really want to learn it? Something to think about!
Posted by Unknown at 2:09 PM No comments: Links to this post 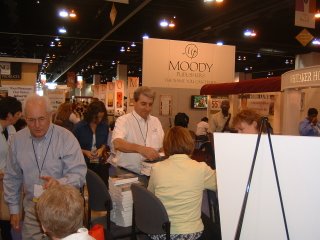 I know that this blog is about Celtic Spirituality, but I'm going to diverge today. (Hey, it's my blog.)

I just returned from the International Christian Retail Show in Denver, CO. It was great fun and educational to see what new books are coming out. My husband was searching for books for "seekers"--those who are looking for spiritual fulfillment and haven't found it in the church so far. What he found was mostly for the churched. It occurred to him that a seeker will likely not pick up a non fiction book, but fiction? There are real possibilities there.

At any rate, I signed copies of Brigid of Ireland
and gave away about 100 copies to book sellers and industry professionals. That's what I'm doing in the photo. I also got to meet some friends (some of whom I'd only met by e-mail before) and the staff of my publisher. Actually, two publishers: Monarch is in the UK and they acquired my book. Kregel works with Monarch to distribute here in the US and in Canada. 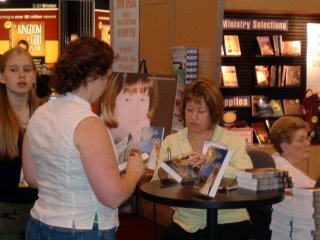 One thing that amazed me was the number of foreign countries represented. I think it was something like 60. Everywhere we went we heard people speaking in other languages. Surely some of the seekers are outside of the US. I truly hope they found some of what they need to spread God's message to the people in their respective countries.

There is a lot of deal making going on during these conventions. As an author it's amazing to sitting by and watch people with their laptops and notebooks open, pens scribbling, while others are talking on cell phones and consulting their Blackberries.

Through all this, people came to my signing and thanked me for writing my book. Can you imagine?

Next week I'll continue the discussion on Celtic Spirituality. But maybe this post wasn't completely unrelated. After all, the ancient Irish monks were only successful because the world was seeking something. Something better than what they already knew. Now, that's an interesting concept. Are we really that different because we use electronic technology and they used what they had? Today, as in the past, we use story and music to communicate. That's what this convention offered.
Posted by Unknown at 10:41 AM No comments: Links to this post

I've been reading Every Earthly Blessing, Rediscovering the Celtic Tradition by Esther De Waal. She says that the Celtic tradition does not distinguish between the spiritual and the secular world. This is unlike the Puritan tradition found in English and American religion, according to De Waal.

I wonder how differently we would treat each other if we viewed everything as spiritual. I'm not an environmentalist (at least not a tree hugger kind of person), but what if we saw God in creation, both human and in the natural world, realized that His hand is in everything? What if we viewed our own bodies as a creation of God rather than as just our own property?

In America, society seems to want separation of everything spiritual--put it aside, keep it inside a church building. Can we separate what is spiritual from what we think is not? Or did the Celts have it right? Is there no separation?

Hopefully, by next week I'll have the book finished and comment some more.

Until then, view life with your heart!
Posted by Unknown at 7:50 PM 2 comments: Links to this post

Ah, I'm late. Friday was two days ago. Well, summer has a way of doing that to you.

I'll take this opportunity to point you to a new blog hosted by 6 authors (one is me!) It doesn't deal with Celtic Spirituality, but it is focused on historical fiction if you're interested.

I think many people (especially Americans) are interested in Celtic Spirituality because they have roots in Celtic countries. You may be interested in reading my post on the above mentioned blog
about genealogy. You may even spot the family pictured above!

How about you? Have you dropped by because your ancestors were Celts? Let us know.
Posted by Unknown at 5:26 PM No comments: Links to this post