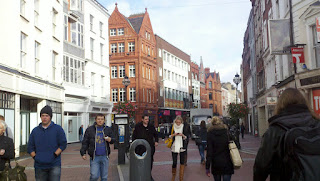 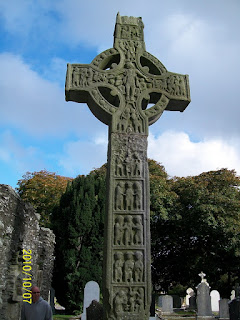 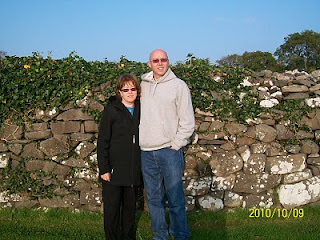 I'm sorry I haven't had much time to post here. For now I'm sharing a few photographs from Ireland.
Top: Dublin street.
Middle: Monsterboise High Cross
Bottom: Me and Tom at Nendrum Monastery Ruins in County Down.
Posted by Unknown at 7:44 AM 1 comment: Links to this post

Email ThisBlogThis!Share to TwitterShare to FacebookShare to Pinterest
Labels: County Down, Ireland, Nendrum

Tribute to My Father 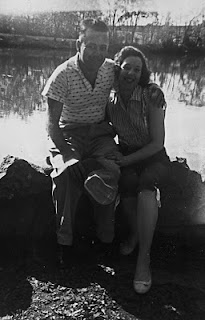 My father passed away while we were in Ireland. We just had the funeral yesterday. This is the tribute I wrote that the pastor read.

I’m proud to say that my dad was a member of the greatest generation—raised during the Depression, lived through WWII, and worked 65 years until he was forced by health problems to retire at age 80. Although he was a tough old Army sergeant, he had four daughters who called him Daddy.

He had a huge heart. He observed family gatherings from his recliner and we will never forget some of what he said:

Shut the door. Were you born in a barn?

(He was always keeping track of everyone.)

Did you get something to eat? Have some more!

Watch those kids. They’ll run out the door and into the street.

Thinking about those things now makes me realize the important role of guardian he played for our family.

My dad was a war hero.

He enlisted in the Navy on May 6, 1942 at age 17. He once answered some questions from me in an email. Here are his own words: “I enlisted because our country had been attacked and in such a cruddy way that I thought that we needed to do those people in. Two thousand of our sailors were entombed in the Arizona and that was too much for me to swallow.”

You’ve probably heard his war stories. Early on the stories were about the places he’d been, the people he encountered, and the men he worked with. In later years he began to have flashback type dreams. He remembered something from early in the war.

He worked on an LCI (Landing Craft Infantry) a type of ship that delivered the infantry to a beachhead. The ramps were at that time operated manually. Again in his own words: “I was the guy who went down the Starboard ramp and removed the cable. Another guy went down the Port side.) He remembered a particular time when the troops were under heavy fire. Men were shot and fell into the water. He thought if he could just pull them to the beach, a medic could get to them and at least they’d have a chance. His job was to remove the cable and run back up the ramp so it could be closed. But this time he was delayed because he started pulling the injured men onto the beach. He got in trouble for that. But he was trying to save lives at the risk of his own. That illustrated to me what a hero he was.

He saw 26 months of straight combat. That is so hard to imagine today. He stayed in the military, choosing to enlist in the Army after the war. He was a 20-year veteran, spent the first two years of my life in Korea while we stayed state side. We lived through a devastating earthquake when he was stationed at Fort Richardson in Anchorage, Alaska, and he was involved in search and rescue there. He was honorably discharged on January 1, 1965, at Fort Richardson.

But I, of course, already thought of my dad as a hero. He encouraged me my whole life. He thought I could do anything so long as I just tried. I’ve been blessed to have had a father like that.

The last time I talked to him he said he was glad I was going on my trip. He passed away at an hour when I was in Ireland photographing a full rainbow. A rainbow is God’s promise that there is more to come. I’m happy for him that he has no pain now, that he’s safe in the arms of his Savior.

We may never be faced with pulling someone onto a beach while under attack. But we can reach out to someone who is drowning in life’s troubles so that they will at least have a chance. If we do this, he has taught us well.

In 1996 my dad wrote down his memories, mostly of WWII. He wrote a farewell near the end that I feel is appropriate to read now.

“To those who carry on I will say one thing. If you have God on your side you can—and you will— survive anything. Goodbye my dears—please pass the torch on to our succeeding generations—your story will be precious to them.”

Posted by Unknown at 7:25 AM 6 comments: Links to this post

I'm taking a break from Celtic Voices, but for good reason! I'm going to Ireland!!! It's my first trip and I know I'll have lots more to share with you when I get back. Please don't forget to come back! I'll post again sometime after Oct. 19. In the meantime, you can follow me on FaceBook to see how the trip's going.
http://www.facebook.com/cindy.thomson
Posted by Unknown at 6:31 AM 2 comments: Links to this post

"I urge you, brothers, in view of God's mercy,
to offer your bodies as living sacrifices, holy and pleasing to God, which is your spiritual worship."
Romans 12: 1
This is an awkward subject for me since, well, I move awkwardly. But I admire those who dance and give praise to God and my spirit--if not my body--moves with them.
I found this YouTube video of J. Philip Newell, an author who I admire who writes on Celtic Christianity. He is leading a "body prayer." I decided to try it--in the privacy of my bedroom. But after I did that I realized I was missing the point. The symbolism is profound--God, self, others.

Posted by Unknown at 6:48 AM No comments: Links to this post