This video was made from viewer submissions to Irish Weather Online. Enjoy!

Posted by Unknown at 8:49 AM 3 comments: Links to this post

Email ThisBlogThis!Share to TwitterShare to FacebookShare to Pinterest
Labels: weather

From the Carmina Gadelica

MAY I speak each day according to Thy justice,

Each day may I show Thy chastening, O God;

May I speak each day according to Thy wisdom,

Each day and night may I be at peace with Thee.

Each day may I count the causes of Thy mercy,

May I each day give heed to Thy laws;

Each day may I compose to Thee a song,

May I harp each day Thy praise, O God.

May I each day give love to Thee, Jesu,

Each night may I do the same;

Each day and night, dark and light,

May I laud Thy goodness to me, O God.

Posted by Unknown at 11:35 AM No comments: Links to this post

Why Do I Long for Ireland? 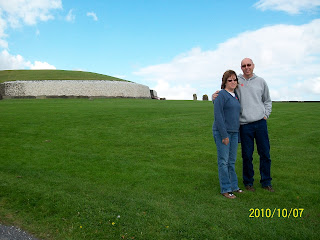 Yes, I knew before I ever went to Ireland that I'd want to return, planned on it, even. But little did I know the emotions that would rise up every time someone on Facebook or Twitter posted a photograph or I walked past those amazing calendars in the mall or I heard some Irish music. Sometimes I want to yell, "Stop it! Stop dangling donuts in front of me I'm not able to reach." (Or maybe scones, but you get the idea!) 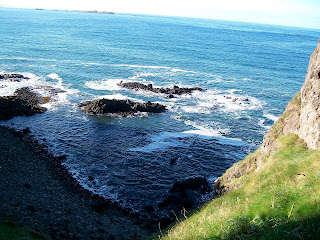 Can I explain this? Not really. Maybe someone can help me. I feel completely homesick at times, and I've only ever been there once! 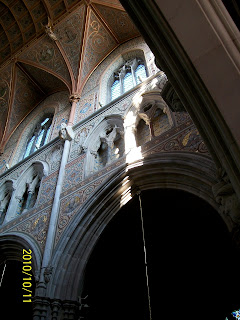 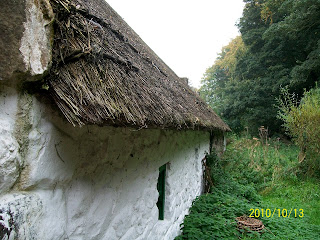 I believe I dreamt about Ireland when I was girl. For a time it was a reoccurring dream, and I didn't know much about Ireland back then so it was much later that I realized what it was. I dreamt about a barn that was partially built into a green hill. The grass was so incredibly green. I had been in the country as a girl. I knew the place I dreamt about was very different. But, I thought then, it was just a dream.

I like where I live. I don't intend to move to Ireland. I'm a proud American and I believe I'm blessed to live in the greatest country in the world. I love the trees surrounding my home, and in October there is nothing more beautiful. But if I could travel to Ireland a couple times a year, I'd be a much happier camper. 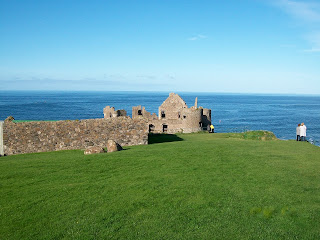 Okay. That's the end of my whining. I'll never buy one of those calendars in the mall, though. Last year I made my own. Maybe the best therapy is to get to work on a 2013 calendar using my photographs.

Posted by Unknown at 10:29 AM 6 comments: Links to this post

Email ThisBlogThis!Share to TwitterShare to FacebookShare to Pinterest
Labels: Ireland, photographs of Ireland

Today I'm blessed to be bringing you my interview with musician Jeff Johnson, who has a remarkable Celtic voice. I have been a fan for a long time. If you're not familiar with his music, this will help explain why I find it so inspiring. (With the talented Brian Dunning.)

Hello, Jeff! You’ve been called a musician’s musician, someone who writes and performs a variety of music. How would you describe your musical style? 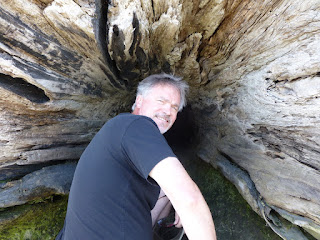 I’ve always been a bit of a minimalist whether I’m doing my solo, conceptual projects, collaborating with Irish flutist, Brian Dunning or working with Phil Keaggy on the new release. The older I get, the more I’m interested in all that is subtle and the space between things. I suppose that reflects my attitude about things in general these days - there’s nothing more that I like to do than to just be still and listen. That’s pretty significant since I’ve always been quite driven and goal oriented.
Technically, I’m still interested in melody, composition and texture of sound. Yet I find that I’m more influenced by the song of bird than a song from a CD.

How has Ireland, its music and people and culture, affected your music?

Well, I’ve collaborated with an Irishman (Brian Dunning) for many years now so that’s one major influence! Yet, Brian and I have never viewed ourselves as ‘traditional music’ players - our music is very contemporary in composition and production. Yet, in much of the music from Ireland, Wales, Scotland, Brittany and Galicia, there is a rich tradition of melody, whether it be a jig or a lament and that has influenced me strongly.

I’ve also been influenced by the Christian traditions from these regions. I find the many Celtic traditional prayers from Patrick, Columba, etc. share a similiarity with the Psalms by David in the Bible. There’s an earthy, organic quality to this spirituality that appeals to me very much.

How did you get connected with Irish flutist Brian Dunning?

I grew up and began my career in Portland, Oregon where Brian lived and was based with the group, Nightnoise. In 1989, I hired Brian to play on a children’s project that I was producing, The Tale of Three Trees. (Cindy's note: this was based on the book by Angela Hunt.) It wasn’t long after that a project was presented to me that married music with the first book of the Stephen Lawhead trilogy, The Song of Albion. I approached Brian about collaborating with me on this since the story had a very Celtic slant to it. Little could I have imagined that that would be the beginning of a rich, musical collaboration between myself, Brian and Steve, as well as a great friendship that we all share with each other.

I do love much of the literature that has come out of Ireland, but it’s been more about the Lawhead stories that have inspired the albums that Brian and I have created. And personally, my favorite one is Byzantium, even though I think that what Brian and I did for “King Raven” was pretty cool, too! I love the scope and range of Steve's storytelling and I've found it quite inspiring to create music to go along with the stories.

I love those too, and Byzantium is also my favorite!
Tell us about your newest release. 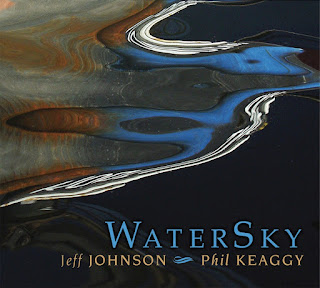 “WaterSky” continues the rich collaboration between myself and guitarist, Phil Keaggy. PK and I were always fans of each other but we finally had a chance to spend some time together at a conference center in Texas called Laity Lodge in early 2009.

We began sending music back and forth to one another just to see what might happen. It all just seemed to “work” and that music eventually became Frio Suite. The new one was recorded the same way with PK and myself sending tracks back and forth and then me producing and mixing the final compositions. We were never in the same room recording on either of these CDs!

But, may I say, it’s not that we don’t like being with each other and, Phil and I have performed a few things together recently and there are some plans to maybe put together a tour of this music. There’s a tremendous musical trust that we share and that has carried over into the process of the actual creation of this music. I can’t begin to describe how much fun it’s been!

Incredible that you and Phil were able to create a CD like that. It reminds me of how I co-authored a book. Everyone reading this absolutely should not miss this video where you can hear Jeff and Phil talk about the creative process. When they speak about the landscape, I'm reminded of the Celtic concept of a thin place.

Brian has been writing some new music and I intend to jump in when I’m ready to. I also lead contemplative worship (Selah) at many churches and conferences and that keeps me quite busy. Right now, I’m savoring the completion of WaterSky, though!

That sounds wonderful. Thanks so much for visiting with us, Jeff! Many blessings on your musical journeys!

Jeff's newest CD is now available. You can order here or on iTunes.

Posted by Unknown at 8:00 AM 3 comments: Links to this post