Merry Christmas! Click the link below and make sure your speakers are on!


http://www.gatrill.com/raaa/media/fiddletree.swf
Posted by Unknown at 4:59 PM No comments: Links to this post

The winner of "Learn Irish With Eoin" is Rose! Congrats!

If you didn't win, the program is available on iTunes. You can find it here:
https://itunes.apple.com/ie/album/learn-irish-with-eoin/id573833803

Have a wonderful Christmas!
Posted by Unknown at 5:20 PM No comments: Links to this post

5 Places to Learn About Christmas in Ireland

I've surfed for you, so enjoy these sites. If you think I've been helpful, please tweet about it by clicking here: http://clicktotweet.com/i0b9R
http://

2. Changing Christmas Fare Through the Ages from Irish Central

4. Listen to Christmas in Killarney

Posted by Unknown at 11:42 AM No comments: Links to this post

Email ThisBlogThis!Share to TwitterShare to FacebookShare to Pinterest
Labels: Christmas

Why It's So Hard to Believe

Do you believe in Santa Claus? It's the season for that question, isn't it? My middle son (now 25) says I lied to him about this, but I was pretty careful to allow him to believe whatever he wanted to believe. And like all children, he gradually gave up believing a man in a red suit entered our house at night and left gifts. He sees the Santa Claus ruse differently than I do, I suppose. He's not bitter or anything. He says that in a teasing way. The truth is, you only hold on to beliefs that you know in your head are true.

I was thinking about this this morning while reading my devotion about Zechariah. A angel came to him. Well, not just any angel, Gabriel, the angel who stands in the very presence of God and brings messages about the Messiah. Gabriel told Zechariah, a Jewish priest, that his wife would conceive and bear a son who would be named John. And John would prepare the people for the coming of the Messiah. But Zechariah didn't believe. He questioned Gabriel. He and his wife were old. How could this happen? And because of his unbelief he was punished with an inability to speak until the baby was born. The question I asked myself was why he didn't believe. Certainly, this was a terrifying event. Who knows what you would do if an angel suddenly appeared to you.

But the angel did not appear to any average Joe on the street. This was a priest. A learned man. A man tasked with knowing things like who Gabriel was (he was mentioned in Scripture) and how important a Messiah was to the Jewish people. And that God had promised to send a Savior. And then when he was told it would happen, he didn't believe.

It worked out all right for Zechariah. He did get his voice back after John was born. But I've been pondering this. How hard is it to believe things that you know in your head are true?

Why It's So Hard

Is it hard to believe in good will? In human kindness? That good will overcome evil? Sure it is. When a mentally ill man randomly assassinates little children, we all ask ourselves if we can still believe. Could it be God has left us to our own evilness? Is He gone? Was He ever there in the first place?

Zechariah and his wife were chosen to be John's parents because they were righteous people. They kept God's laws. They did believe. This was a momentary lapse of faith for Zechariah. Zechariah might have lost his belief for a moment, but God did not stop believing in him. He would still be John's father.

When something happens that is beyond our ability to comprehend it, we're stunned and we do find it hard to believe. But we will come back to our belief that there is good in the world because we, as followers of Christ, have hope. And hope is the thing that we hold on to when there is absolutely nothing left. When we are hanging on by only a thread, the thing we are holding onto is hope.

It's the season of hope. Good will concur evil in the end. Believe it! 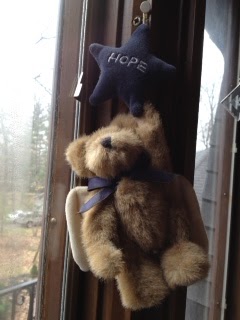 Posted by Unknown at 10:44 AM No comments: Links to this post

Yes, You Can Learn Irish, Virginia! 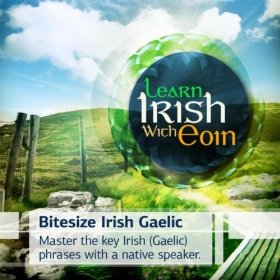 I have a unique opportunity to offer you, thanks to the folks at Bitesize Irish Gaelic. You'll find their special offer at the end of the post. Jennifer at Bitesize wrote the following information, and while she said I could edit it, I'm leaving it in her words because they sound so wonderfully Irish (even in English!)

So, if you've ever wanted to speak Irish, here's a great way to learn!


Have you ever wanted to learn the language of your Irish ancestors but haven't been able to find a program that works?

Bitesize Irish Gaelic is an Irish online language-learning company who have created a lesson plan tailored to suit your needs. All of the lessons are broken down into small pieces so that you can understand the language as you are learning it, as well as making it completely achievable.

They've recently released an album called "Learn Irish With Eoin" where you can learn the Irish language on-the-go. It is an mp3 download-only album available on iTunes and contains everything you need to spark up a conversation in Irish Gaelic.
The album is a new way to learn the language and it is recorded by Eoin - a native Irish speaker who explains the concepts to you in English.

The album is just over 2 hours long and there are 16 tracks in total, including:
The two words you need to start a conversation in Irish
Count from 1 to 10
Say where you are from
Everyday phrases for Irish (Gaelic) conversation

"Learn Irish With Eoin" is available on iTunes and makes the perfect gift this Christmas.


So, here's your chance to learn for FREE!

Bitesize Irish Gaelic have given me a copy of the album to give away. All you have to do is comment underneath this blog post with the phrase ‘IrishGaelic’ along with your email ID to be in with a chance to win. The competition ends on Friday 21st December so make sure you're in to win.

Posted by Unknown at 8:27 AM 5 comments: Links to this post