An Apology and a New Year

It's true. I have not been blogging over here on Celtic Voices, and I miss it very much. I had good reasons. I was working on two novels for Tyndale House and then I was promoting them like crazy. And now...now I'm missing Ireland, missing my wandering through Celtic research and Celtic Christianity.

I did finally get Brigid of Ireland posted on Kindle with a new cover. I much prefer this cover. 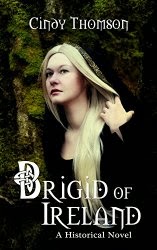 
And I'm beginning to dig around for some older work that didn't find a home and tweak some proposals to send to my agent. And in the process I started looking for some reviews of Brigid of Ireland. There was one by a Boston Irish-American publication in particular that was looking for online. And then I found a scathing review and it bruised me a bit. Brigid was my first novel, published nearly nine years ago. People are still enjoying it. And of course some people don't like it, and that's what happens when you put a book out there. "Some people just won't get your work," my friend author Susan Meissner once said. And you have to accept that and move on. Fair enough.

But....sometimes I just long to correct something someone says that I believe is not a fair assessment. I won't do that to a reviewer in a public forum, or even privately. I won't call them out, because that only causes more problems and solves nothing. But this time, there was one thing in particular that bothered me and I thought I'd discuss it here.

I knew when that book came out there would criticism because Brigid is not a figure that can be established with any kind of historical accuracy. Therefore, I used my own interpretations of her within the best historical setting I could put on paper--at the time--like I said, nearly nine years old now. I knew the novel could be controversial because of the pagan/Christian thing. (I also expected criticism for being an American writing about an Irish saint, which I have received from a few people. But my publisher (in England) expected most readers would be American, and they have been. And I don't pretend I'm anything but American.) In addition I was writing for a Christian publisher, with a Christian world point of view. And, it's fiction. Over the last nine years I've brought Brigid to many, many Irish festivals in the U.S. Midwest and met both Christians (including nuns who love to talk about Brigid having been a bishop) and pagans and wiccans who all wanted to discuss Brigid. We've had friendly discussions. It's all been quite civil.

I do my research. It's what my readers have commented on more than anything else in all my books. I don't claim to be without fault, but I think I do a pretty good job with research. So I take exception when it's claimed that I am a bigot for suggesting that Christians during St. Brigid's time might have been afraid of pagans. (Some pagans, not all. There is a very kind druid in this book by the name of Bram that some people like to forget about when pointing out that Brigid's father was a cruel pagan in my book and that the bad guy Ardan was as well.)

St. Patrick is the Irish saint most people are familiar with. He lived before Brigid but he was the one who enabled Brigid to do her ministry in Ireland. He set the foundation. Ireland had more Christians in Brigid's time than in St. Patrick's, but it was still mostly a pagan country. It would not be until the Christian monasteries began to flourish in the 6th century that Christianity became widespread. So, I imagine Brigid was still in the vast minority being a Christian. (Read more in Celtic Wisdom, Treasures From Ireland.)

From St. Patrick's Confession:
" I bore insults from unbelievers, so that I would hear the hatred directed at me for travelling here. I bore many persecutions, even chains, so that I could give up my freeborn state for the sake of others."


"There was a blessed Irish woman of noble birth, a most beautiful adult whom I baptised...Their fathers don’t like this, of course. These women suffer persecution and false accusations from their parents, and yet their number grows! We do not know the number of our people who were born there. In addition, there are the widows and the celibates. Of all these, those held in slavery work hardest – they bear even terror and threats, but the Lord gives grace to so many of the women who serve him. Even when it is forbidden, they bravely follow his example."


"At times I gave gifts to kings, over and above what I paid to their sons who travelled with me. Despite this, they took me and my companions prisoner, and very much wanted to kill me, but the time had not yet come. They stole everything they found in our possession, and they bound me in iron."


"...daily I expect to be murdered or betrayed or reduced to slavery if the occasion arises."


St. Patrick's other writing, A Letter to the Soldiers of Coroticus, is all about the cruelty the Irish Christians experienced.


For example:
"The very next day after my new converts, dressed all in white, were anointed with chrism, even as it was still gleaming upon their foreheads, they were cruelly cut down and killed by the swords of these same devilish men."

I do not for a minute believe all the non Christians were cruel or that all the Christians were good. Not for one minute. But to deny the persecution of Christians during this time period is also erroneous. We do not have original writings from St. Brigid. But we do have these from St. Patrick.

I realize that each person brings his or her own sets of values and core beliefs and even unknown prejudices as he/she reads a work of fiction. It's impossible to be completely unbiased, in my opinion. I just wanted to show the other side.

What do you think?
Posted by Unknown at 3:33 PM No comments: