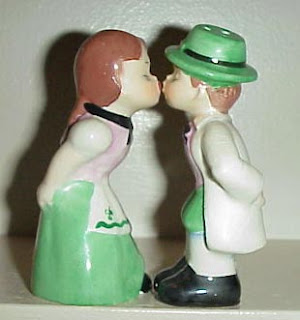 In ancient times, before the church, couples were wed outdoors in front of a king at a site of some spiritual significance. Large trysting stones were part of the ceremony, at least one was on Cape Clear, an island off the southern coast of Ireland. On this island native Gaelic is spoken. A five thousand year old passage grave can be found along with a 12th century church ruin, and a 14th century castle. St. Ciarán, one of Ireland's earliest Christian fathers, is the patron saint of the island. This island is on my list for my next visit to Ireland. 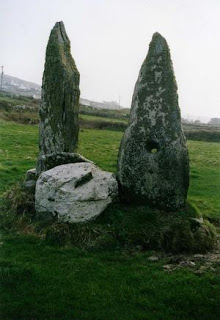 There is a standing stone on the island with a hole right through it. Apparently a man and woman would stand on each side, stick their arms through, and hold hands while declaring their intention to marry or the actual marriage ceremony in front of the king would be conducted there. How sweet is that?
Posted by Unknown at 7:59 AM