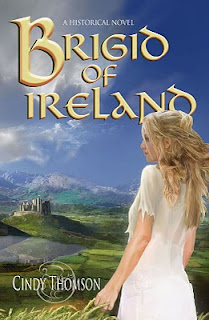 Ah, 'tis a day that is near and dear to my heart! 'Tis the feast of St. Brigid!

My dilemma is what to blog about. I've blogged about her here and here. But not to worry. There is still so much to tell!

As Joseph A. Knowles said (and is mentioned in my book, Celtic Wisdom):
In a life of the Saint...many legends and traditions must be introduced to stimulate the devotion of the reader, and to relieve the monotony which would inevitably ensue from a mere studied recital of historical detail.

So, Knowles gives us permission to let our imaginations run free!

St. Brigid is associated with fire. When she was a baby neighbors saw the house was in on fire. They ran to it, fearful that the babe had perished in the blaze. However, the house was just aglow and she was unharmed. This miracle was a sign that she was favored by God. She is also connected to an eternal flame. At her duel monastery (both men and women) she and nineteen virgins tended a flame. After her death the fire needed no tending on her assigned night. The fire continued perpetually until the 13th century when it was extinguished. It was soon relit and continued until the time of the Reformation when it was put out. In 1993 the tradition was renewed by the Brigidine Sisters and continues on today.

Brigid is associated with the hearth, which was the center of the Irish home. Surely the kitchen today is the heart of the home. I found this recipe on About.com and gave it a try. One of the traditions is to leave some of the bread on the windowsill for St. Brigid. I think I'll do that. The birds will enjoy it, I think. Below is a photo of my actual loaf. 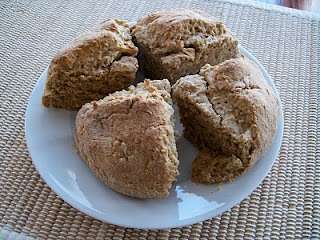 Mix flour, sugar, baking powder, baking soda and salt in a bowl.
Add butter flakes, cutting them in with a knife until the mixture becomes crumbly.
Add oats and mix well.

Beat the egg with the buttermilk in a separate bowl.

Make a "well" in the dry ingredients, then pour in the egg mixture and mix all with a fork until the crumbs hold together.
Form the dough into a ball and knead (on a floured surface). Add flour if the mass is still too sticky to work with. (Just count on adding more.)

Form the doughball into a round bread and place it on the baking sheet.
Score a cross into the bread (do not cut through).

Bake for fifteen to twenty minutes, the bread should be medium brown.

I've never been accused of paying attention to presentation when I cook, so although my loaf wasn't pretty, it tasted pretty good. If you make a loaf, let me know. If you email me a photo, I'll use it in my next newsletter. What? Don't get my newsletter? Sign up here: http://www.cindyswriting.com

I think I'll blog some more about St. Brigid this week. I hope you'll come back! :)